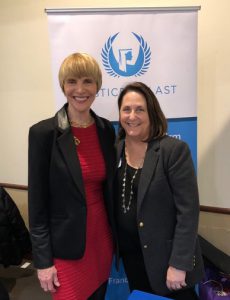 Marti also did a book signing featuring her two critically acclaimed and award-winning memoirs, Never Give in to Fear and Fierce, Funny, and Female. Ms. MacGibbon donated proceeds from book sales to Justice At Last, a non-profit headed by Rose Mukhar, a well-known California attorney advocate (and recipient of the Modern-day Abolitionist Award) who provides pro bono legal services to victims of human trafficking. Marti is a Survivor Advisor at Justice At Last. The Sacramento conference was organized by My Sister’s House, a non-profit serving victims and survivors of human trafficking, sexual assault, and domestic violence. On January 16th and 17th, Marti presented a series of trainings to healthcare professionals on trauma-informed care best practices for engagement with victims and survivors of violence. The talks were delivered at medical centers in Central Coastal California.