I’m a survivor of sexual assault, abuse, and exploitation, as well as intimate partner violence, and for the past eight years I’ve been actively engaged in advocacy for victims and survivors. Sexual assault carries both heavy stigma and high risk of post-traumatic stress disorder for victims. Mistaken beliefs about sexual assault and rape myths abound, and victim blaming is commonplace. Still, we’ve made some real progress. As I write these words, the month is coming to an end, with two separate watershed events occurring during the final week of April 2018.

First was the Bill Cosby verdict. A Pennsylvania jury found Mr. Cosby guilty of drugging and sexually assaulting Andrea Constand. This was the first high-profile rape trial since the #MeToo movement accelerated into the mainstream several months ago. For many observers, and especially survivors, Cosby’s conviction appears to herald a sea change in societal attitudes toward victims of sexual assault. And it’s about time! Years ago, when the Cosby case began to unfold and I began to follow it, it seemed to me no one listened to the women who came forward. They were denigrated, blamed, ridiculed and accused of lying with the aim of extorting money from a rich and famous celebrity. It wasn’t till forty-eight women came spoke out that their stories began to gain credibility. Finally, sixty women in all have formally accused Mr. Cosby of sexual assault, abuse, or misconduct.

The second event was the arrest of a suspect after a forty-year-old hunt for the violent serial rapist and murderer known as the East Area Rapist, the Original Night Stalker, and most recently, the Golden State Killer. Sacramento police apprehended Joseph James DeAngelo in his home in Citrus Heights, having tracked him through DNA. Authorities say the Golden State Killer is responsible for at least forty-five rapes, twelve murders, and countless break-ins all over California since the Seventies. The Golden State killer terrorized communities and left no evidence at crime scenes, leading police to surmise the perp likely came from a law enforcement or military background. DeAngelo, now seventy-two years old, once worked as a police officer, and served in the Navy during the Vietnam war.

What can be learned from these events that can help us improve our society’s level of sexual assault awareness and improve our communities’ efforts at prevention?

Educate the general public about rape-specific trauma and how it affects victims.

We need to build a trauma-informed culture. When we blame and shame victims of sexual assault, we exacerbate the risk, severity and duration of their post-traumatic stress. Victim self-blame is related to post-traumatic stress disorder in many different kinds of trauma. But research by Avigail Moor and Moshe Farshi of Tel-Hai Academic College School of Social Work reveals that self-blame following rape is dramatically more extreme:

Given typical societal victim-blaming following rape, self-blame is expected to be considerably more extreme among survivors of rape than in other victims, and predictive of relatively elevated post-trauma symptoms. Three hundred and four participants completed measures of blame attribution and PTSD, sustaining the hypothesis.

Studies have shown that the prevalence of PTSD among sexual assault victims and survivors is significant, and that both victim self-blame and societal blame/stigma pose barriers to PTSD treatment and recovery. To learn more about specific trauma associated with rape, read Sexual Assault and Posttraumatic Stress Disorder: A Review of the Biological, Psychological and Sociological Factors and Treatments, by K. A. Chivers-Wilson, McGill Journal of Medicine.

Early in the Golden State Killer’s bloody spree, in 1977, a Sacramento Sheriff’s detective named Carol Daly gave tutorials on self-defense to a terrorized citizenry, and treated rape victims with deference and respect. She did all of this at a time when sexual assault survivors were often re-victimized by law enforcement, and by the attitudes and reactions of friends and family. Detective Daly is worthy of praise. I was sexually assaulted in the Seventies. After escaping the rapist, I reported the crime to the police, and was re-victimized and re-traumatized by their attitude and response. And yes, they asked me what I was wearing. We’ve come a long way since the Seventies, but there is still plenty of room for improvement. When I travel the U.S. as a humorous inspirational speaker, young women tell me they have had similar experiences with municipal and campus police alike.

Put an end to punishing sexual assault survivors for speaking out.

As the Cosby case drew attention in the media, people asked, “Why did it take these women years to report the assaults?” In her 2006 paper in the American Journal of Community Psychology, Being Silenced: The Impact of Negative Social Reactions on the Disclosure of Rape, Courtney E. Ahrens writes how negative reactions silence victims of rape:

When sexual assault victims encounter victim-blaming, they are discouraged from reporting the incident. Myths about rape and societal stigma, along with stereotypes about victims — for instance, that “a certain kind of girl” is likely to be raped, can keep a victim from coming forward and seeking help. This is why the #MeToo movement precipitated so many stories from both men and women, stories that involved events from the past that the victims had held back for years. Another stereotype is that of the “legitimate rape” or “real rape.” Rape victims internalize these myths and stereotypes. The self-blame causes victims and survivors to believe that they are not worthy of support, that they “got what they deserved” for going out alone at night, or in the case of Mr. Cosby, of going to his house. And often the people closest to the victim universally reinforce these myths, misconceptions, shames and blames.

Self-Empowerment techniques enable independence, self-assurance, and self-actualization along the healing path. EMDR (Eye Movement Desensitization and Reprocessing) is a recommended therapy for trauma. It helped me. Cognitive Reframing benefited me as well. But most of all, the therapeutic relationship between me and my trauma therapist was the vehicle that enabled my healing and empowerment. Transformative relationships happen along the path to recovery, and we can discover many different ways to comfort and support one another. You can become naturally therapeutic in all your relationships, and in doing so, you transform your environment.

In her essay, From Victim to Empowered Survivor, Dr. Avigail Moor, PhD, who has worked extensively with survivors of sexual assault, recommends what she calls “Feminist Therapy”:

It is a relationship in which clients are empowered to find their strengths and strivings, a practice in which growth-promoting reframing of social realities allows for new ways of thinking and being. It is a process of connectedness in which each client is made to feel worthy of respect, affection, tenderness, and judgment-free acceptance, an endeavor of caring…

Be kind to yourself and others.

We can all use a lot more kindness, empathy, empowerment, and compassion in our lives today. Let’s educate ourselves about how to treat ourselves and others around us, with respect, dignity, and generosity. Let’s forgive ourselves and others, and focus on ways to find beauty and grace in our daily lives.

Self-kindness is not only for trauma survivors, it’s for everyone. Here’s something I do when facing challenges or feeling off-center:

Take a moment to reflect on the things that matter most to you. Ask yourself, “Who do I love, and who loves me?” Pause and give thanks for every friend, mentor, or stranger who ever did you a kindness. Make a mental note of the people you’d like to help or uplift or do a kindness for. Remember a past obstacle or hardship you’ve overcome and draw strength from acknowledging that victory. As you face the future, tell yourself, “I stand in love, I speak from strength, I move forward with purpose and meaning. No matter the outcome, I am enough, in this moment, just as I am.” 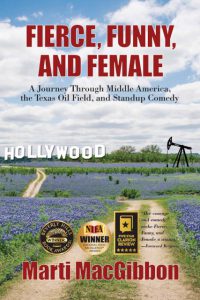 Marti MacGibbon, CADC-II, ACRPS, has survived and triumphed over human trafficking, childhood sexual assault/abuse, rape, and domestic violence. She is a popular keynote speaker and an advocate for victims and survivors of gender-based violence. Marti is author of the nationally and internationally award-winning memoir, Fierce, Funny, and Female, a dramatic and humorous story of empowerment and resilience.