February 16th is National Do a Grouch a Favor Day, a call to kindness in the name of a grouch. You can celebrate this occasion in a variety of ways — and whether you are the “grouch-er” or the “grouch-ee” doesn’t matter, your kind act will benefit you either way. We’ve all been ill-tempered, irritable, or complained too much, and we all know somebody who engages in those behaviors. There’s no shame in being a grouch: comedian Lewis Black built a very successful and celebrated career on grumpy rants. During my research for this post, I discovered a West Coast independent hip-hop artist with the stage name, The Grouch, and I downloaded some of his music. I also was reminded of the classic Sesame Street character, Oscar the Grouch. Whether you know a grouch, work for or with a grouch, or you are one, take a moment to celebrate it. And you may want to watch a clip of Oscar the Grouch in action, or check out that hip-hop artist, The Grouch. His song, “Breath” is upbeat and a good one to start with.

Now, about doing a grouch a favor…

Over the past decade, research has shown that being kind to others can result in more life satisfaction and maybe even more happiness. In a study published in the Journal of Social Psychology, scientists instructed one group of test subjects to do a kindness for three people each day over a ten-day period, instructed a second group to do three new things over the same time period, while a third group were instructed to do nothing at all for the same number of days. All test subjects reported on their level of life satisfaction and sense of well-being. The results showed that the group who did nothing reported no change. Both the group doing the kind acts and the group engaging in new experiences reported an improvement in mood and life satisfaction. But the group doing kind things for others reported the highest levels of happiness.

Research on the kindness to happiness connection abound. In a University of Oxford study, scholars reviewed metadata on the many studies and reported that being kind to others does make you ‘slightly happier,’ but they added that the happiness uptick is only an increase of about one point on a ten-point scale. That’s still significant — especially if you’re a grouch.

If you’re the grouch, do yourself a favor. When you show yourself kindness, the benefits are the same. Self-kindness and compassion really do work. You can give yourself a break, buy yourself something, or use positive self-talk to build yourself up. Or you can motivate yourself to be kind and good to others by learning how people who engage in positive behavior are more likely to be well-liked, more productive and happier. Kindness counts.

When you’re kind to strangers, friends and loved ones alike, you build your kindness potential — continue that practice and the behavior becomes a habit. And you may want to include charitable spending in your strategy. The amount of money doesn’t matter, it’s the giving to another. In the Journal of Happiness Studies, one research project published shows evidence for a positive feedback loop between spending for the good of others and happiness.

Do you have a special grump in your family?

Giving your support to a loved one has shown to benefit you as much as it benefits the one you are supporting. We talk a lot about the power of being connected to a positive support network, but sometimes we tend to think of only connecting to receive support. The truth is, both giving and receiving are equally important in the process of being connected. A study published in the Psychosomatic Medicine Journal shows that when you’re giving support, the rewards in your brain include stress reduction and other soothing neural bonuses. 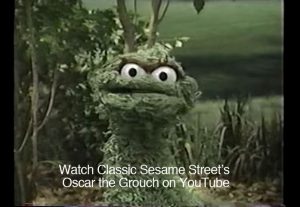 So, do you think you’re ready to celebrate National Do a Grouch a Favor Day?

Are you wondering exactly which kind acts you’ll engage in? Don’t worry!

The Kindness.org site offers interactive ways to get started on your kindness plan. Think of it as joining a goodwill gym and building your kindness muscles. Put on some hip hop by The Grouch, and do some reps! In the arena where kindness takes on grouchiness, the benefits far outweigh the risks.

Keywords: acts of kindness, comedian, National Do a Grouch a Favor Day, The Grouch